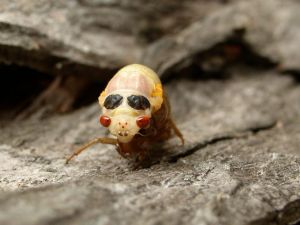 They're swarming the planet by the BILLIONS! They've been burrowing unnoticed beneath our feet for YEARS! It's the Invasion of Brood XIII and they only have MATING on their minds. Can humanity survive the invasion?!? Coming soon to a webpage near you.

Brood XIII: Bug-Eyed Nympho Invaders from the Center of the Earth!

This morning was another one of those magical overcast days like I talked about last time. However, this time, the nymphs I'm seeing aren't mosquitoes, but cicadas.

I've long been fascinated by cicadas. I first experienced an emergence in Oklahoma when I was a kid in first grade, (Brood IV in 1981). It's certainly an interesting survival mechanism they have evolved -- overwhelm your predators all at once and most of you will survive. Also, the absolute predictability of the emergence is astounding each time I experience it. In the past, I was impressed by the predictability of the year and month, now there's even a formula to predict the exact date.

Kritsky, an entomologist, expects cicadas to emerge in the Chicago area on the evening of May 21 and the early morning hours of May 22. He developed his formula by comparing more than 100 years of research on cicada outbreaks and historical weather data. The formula is E = (19.465 - t)/0.5136, where "E" is the emergence start date and "t" is the average April temperatures in Celsius. The formula is keyed to what kind of weather Chicago had last month. [1]

Some people complain about the noise, but just imagine it... You've just come through puberty. You've never seen another woman in your entire life. Suddenly, there are billions of them around. However, you've just discovered that you only have a few weeks left to live. "Ok," you think, "This is a great pick-up line! 'Hey baby, I only have a few weeks to live and I've never had sex.'" Unfortunately, you find out that a few billion other guys are using the EXACT SAME LINE! Then you realize that even if, by some miracle, you did not die in a few weeks, there wouldn't be any women left on the planet! You'd be the only surviving adult left on the planet, with a few billion babies to take care of. Wouldn't you start screaming too?

In the past, I've missed the actual emergence itself, only being able to listen to adults and hunting exuvia. (I happened to be in school in West Virginia during the Oklahoma emergence.) This year I was prepared. (OK, so I was only partially prepared, as I forgot to get batteries for my camera.) When the weather got to the right conditions, and the predictions for the emergence made (when mean soil temperatures exceed 65F), I made sure to be outside that evening. The evening of the 22nd, as I came home from the train, there were on the order of hundreds of them coming out on the sidewalk on my entire trip. The following morning, I counted 20 in a single sidewalk square. I have been able to observe nymphs coming out of the ground, watch them make the long climb up a tree, watch them molt, chase them around as their wings dry and watch one take it's first attempt at flight. (OK, so the giant monster chasing it around was a pretty strong incentive to try out the new wings. :) ) Unfortunately, my fresh camera batteries were left in the charger at home, so I haven't been able to take pictures as much as I wanted.

Of course, if you are going to be staring at bugs on trees, you have to be prepared for the sickening *crunch* that's bound to happen whenever you walk in the grass around an established tree at this time. You just try not to move around too much :) (Of course, standing still has its own perils, as one of my neighbors pointed out. If you start resembling a tree too much, be prepared to find giant bugs slowly crawling up your legs.)

Another interesting aspect is that they serve as sort of living ecological time capsules. As an example, you can tell that 17 years ago there was a very substantial tree on the corner of my block because there was a flood of nymphs that came out and, not finding a tree still standing, they started molting on the sidewalk.

Anyways, this has been just another in a series of Rambles on nymphomania (see the last RanTom Thought on the effects of Spring on the heterosexual male.). Stay tuned next time for a dissertation on Nymphs in Greek Mythology. (Or not. You can't prove I said anything! This could have all been written by the family of Honduran spider monkeys renting my brain!)

Discuss! Tell me about your own cicada-related experiences.