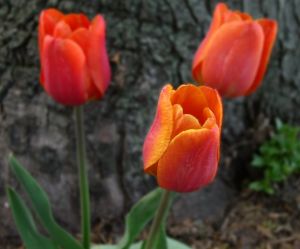 Tiptoe through the tulips with me!

Winter has finally decided to concede to Spring.

Today's Thought is not so much of a Rant as a Ramble. I'm just excited that Spring is here and everything's turning green, and I can take off my jacket, and the breasts are in bloom and... um... where was I?

(OK, so I've been watching too much Coupling lately. I'm starting to channel Jeff. But still, I'm a single heterosexual male. There's something about when the jackets and sweaters come off in the spring that tends to drive one slightly mad after the bosoms have been in hibernation for 5 months. OK, maybe not "mad", but a bit distracted at least. Guys start walking around with silly grins on their faces all the time and a bad case of dry-eye from not blinking enough.)

Anyways... enough of that.

Last night on my way home from the train station, I just happened to be out at sunset. It was a beautiful pastel pink sky going to a hot pink horizon. (See Image:200005b Bahai sunrise.jpg to see the type of colors I'm talking about.) It was one of those sublime, at-peace-with-the-world moments. The tulips were in bloom and the rabbits were fornicating. (OK, so I don't know if they were actually doing the squelchy yet, but I saw six of them on my way home and I'm sure in rabbitese they were all saying to each other, "Let's do it like humans!") 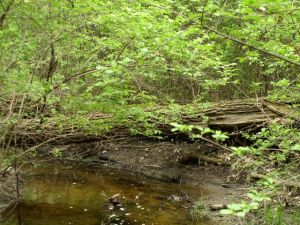 Green streams scream in my dreams

Green is an interesting color. There's something magical about when the woods start turning green. It's no wonder Spring is so important to so many of the (earth) magic traditions in the world. On an slightly overcast day, with everything coming alive around you, there is sort of a mystical feel and one can almost believe in fairies. Of course, then you realize what you're seeing are just mosquitoes waking up for breakfast. Then you start to wonder about that. Could spring mosquitoes have been the origin of the fairy legends? Then you start thinking it's about time you read Songs of Earth and Power again because it's the best story about the Sídhe that you've ever read. Then you realize you've been standing there for 10 minutes with your camera in your hand with your mind wandering all over the place and you really should be getting to work, but you don't want to because you really feel that This Moment is just the best thing that's happened to you perhaps in your whole life and you don't want it to end, you just want to savor it and drink it in. Then you realize you're doing it again and when you type about it you're going to start going into Faulkneresque stream of consciousness writing, but you just won't be able to stop it and where was I? Oh yeah. I have been standing here advertising the Blue-Plate Special for all of the mosquitoes in the surrounding three counties for half of an hour now. 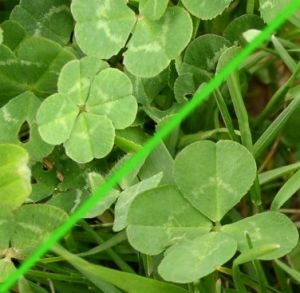 Anyways, it seems that mutant hunting season has now formally begun. I found two mutants on my way in to work this morning.

I like Spring in Chicago. (Of course, I like the colors of Fall and the snows of Winter too. Summer's not bad either, with all of the festivals and breasts... er... I mean. Um. What do I mean?)

So, I leave you with this thought at the end of today's Ramble. Carpe Diem! Seize the Breas-- I mean, Seize the Day! (OK, I know, the phrase "carpe diem" is so last century, and now that that bit of frivolity is done, I won't use it anymore, I swear! Unless I really want to for some reason. :) )