Of Weddings, Belly Dancers, and Joy 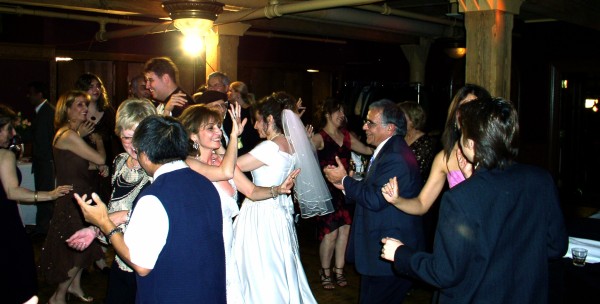 Paul Raptis (our section manager) with the belly dancer :D

Last night I went to Sasan's wedding reception at Reza's. (Sasan is my immediate supervisor at Argonne.) Reza's specializes in Persian food. Since Sasan and Shiva are both from Iran, it makes sense :). Most of the guests were family members and co-workers from our section. And yes, even the scientists (including yours truly) were out there dancing and having fun.

Sasan's wife seems nice, although one has to think Shiva is a rather ominous name.

I realized that this was the first reception I had ever been to that involved alcohol and dancing. Growing up as an Adventist, with primarily Adventist friends, every wedding I had been to were Adventist affairs. It is definitely a stark contrast. Wine and dancing make it a party, celebrating the love and joy and LIFE that marriage is supposed to entail. Adventist wedding receptions are boring as hell. Adventists don't believe in eternal hell, so fortunately it's short-lived. Suddenly things are made so much clearer to me about why people actually LIKE weddings. It was a complete mystery to me before. (Another issue that was a Big Deal when I was a kid was whether married couples were allowed to wear wedding rings since Adventists aren't supposed to wear jewelry.)

As for the alcohol side, if I hear another Adventist try to say that the wine used at the famous "water into wine" incident at the wedding reception in the Bible was just 'grape juice', I'll scream. People in the Bible drank ALCOHOL... get over it!

I'll definitely say this. If I ever get married, it's definitely NOT going to be an Adventist affair, no matter how much family members protest. If one subscribes to the notion of weddings, they're supposed to be happy occasions, not dry contracts. It probably won't be a Persian wedding though, so alas, noone will surprise us with a belly dancer... *sigh* :D