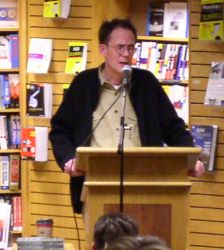 Gibson talking at a book signing in Chicago

I'd read Neuromancer before, but I'd never read the sequels.

I have a weakness for books that do something original or start a genre. This book is largely responsible for the cyberpunk genre of science fiction. It's hard to see it now because the format has been copied so many times, but it was truly an original work. True, better works have come since in the genre, but this is still the original that got everyone thinking.

His buyer for the three megabytes of hot RAM in the Hitachi wasn't taking calls.

I find that quote so utterly droll. It's amazing how much writers/computer geeks in the 80s underestimated the size memory would grow to. The amount of bandwidth he talks about is similarly humorous. He talks about cities using Gbit bandwidths when today we have that much going to individual residences.

It's entertaining how he uses the word 'microsoft' not for the company, but for a type of software. A writer just couldn't get away with that today.

I had never realized before that Johnny Mnemonic was also in the Sprawl universe. I just never connected the two, until Molly starts talking about her old boyfriend Johnny who was a data trafficker, & etc, etc.

Anyways, I still like it, maybe not so much for what it was, but what it did to our culture. (Hey, where would The Matrix be without Neuromancer? It would probably have been called The Net or something. Oh wait. That was that movie that -- noooooooooooooooooooooooooo!!)

One thing I really disliked about this book and Mona Lisa Overdrive was that they were really two parts of the same story. The combined book is not long enough to split into two books! I hate it when authors do this. I can understand when the combined book would be, say, 800 pages, but the combined book here would be 546 pages, even if all duplicate material is left in. (By duplicate material, I mean reintroducing characters, backstory, etc.) That is by no means pushing the limits of an acceptable book length. (Just look at the Harry Potter books or King books, etc.)

Secondly, this book is really lacking in the one aspect that made Neuromancer "work"... namely The Matrix and the AIs that inhabit it. (This further shows that C0 and MLO were intended to be one story, since MLO brings that element back in based on things started in C0.)

This book does not conclude so much as just end.

The only thing I can say for this book is that Gibson did correctly predict that the Goth subculture would outlast most of the other subcultures of the 80s.

OK, so let me get this straight. The title of the book is about the title character taking drugs? That's it? It's not even an important story plot point! She was doing that from the very beginning. It doesn't help with the plot resolution or anything. This has to be one of the worst book titles I've seen.

(See the Count Zero section above for thoughts on the completeness of these two books.)

If you're going to have multiple storylines in a book, a good rule of thumb IMO is to devote at least 150 pages to each storyline. (This applies to C0 also.) MLO had four storylines, but only 300 pages. Two stories are seriously lacking somewhere.

Particularly, I was disappointed in the Kumiko storyline. Kumiko's story does not have a real conclusion at all. So she.. um.. goes shopping? Okaaaay. Her main purpose in the story is to insert Colin into the Matrix? That is just weak.

Similarly, Mona's story is quite weak. The resolution is that she becomes a simstim star? Again, she doesn't really do anything to help the story along. Even her titular role as a drug addict does nothing to help (or hinder) the central plot.

Even the Angie / Count storylines were weak in their endings. (And their introductions if you take this book as a single unit.) The whole drug story with Angie was wasted as well.

At least we saw the return of Molly here. However, even she seems a watered down version of her Neuromancer self.

At least this book has more of a conclusion than C0 did.