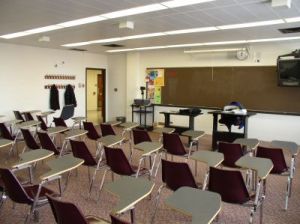 Room 530, in which I partook in the ritual that is seppuku... I mean, the GRE Subject Test

I took my Physics GRE Subject Test yesterday. Reviewing classes you took over a decade ago is not a fun task, so I took a few weeks off of work to prepare. Last time I took the test I had just come out to Chicago, so I didn't have any of my textbooks, all I had was GRE Physics - The Best Test Preparation for the Graduate Record Examination Subject Test by REA. This time I bought a new copy of the book to see if they corrected the two mistakes I found last time. This time I found at least 20 in the review materials and at least that many in the practice tests / answers. (Which means I knew the material better at least, since checking the old book showed they were there in that edition as well ;) )Another problem with the REA book is their tests aren't as carefully prepared as the real test. The real GRE is designed so a calculator isn't needed for the most part (or allowed), but the REA questions, while using the same type of questions, don't select their numbers carefully enough to be able to avoid bringing out the calculator to calculate the square root of 5730948. Also, their solutions will often go the long way to solve a problem. (i.e. using kinematics to solve a problem that is MUCH simpler to solve using energy equations.) 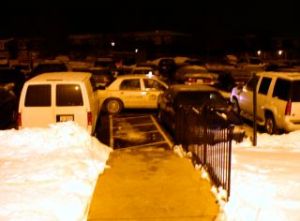 Cab actually waiting for me on time! *gasp* 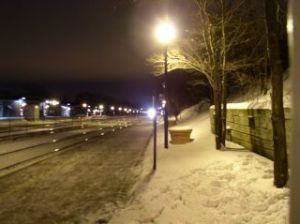 So yesterday morning, in order to make it to the test site by 8:30, I woke up at 4:30AM. Yep... before the sun, I was up. I had arranged for a cab with Regional Taxi the night before. (Last time I had lived at Argonne and used Universal Taxi. When I took the General GRE, the cab driver had been so late I was forced to have him drive me all the way to the Loop... More on Universal later.) The cab was here on time and waiting when I got downstairs. *whew* I had called for a pickup at 5:00 because the previous day had been snowing bad, so I had no idea how long it would take to get to the train station. The roads were clear and the weather was nice so we were there in no time... Unfortunately, this meant I had 35 minutes to wait for the train in the cold and it started snowing. (METRA started locking up the stations at night / weekends this last year for some reason, so there's no longer any place to get inside out of the weather. *gripe* I WILL be writing a letter. (Fortunately I was prepared... I had fixed my oatmeal to go so I could eat it at the station to keep warm.)

So the train arrived relatively on time (shock) and I got downtown at around 6:40. I walked from Union Station over to State Street to catch the Jackson Red Line station. (Yes, there is a subway entrance in the picture. Isn't the picture pretty?

You'd better click on it so you can look at it.

You know you want to.

The story's not going to move on until you do. That's the whole reason this paragraph is here.)

See, now that wasn't so hard, was it? Now we can move on with the rest of the story. 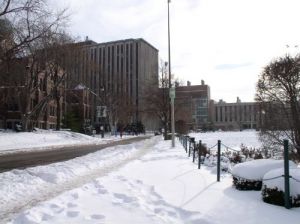 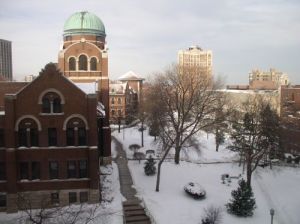 View from my seat

For those who don't know the Chicago train system, the Red Line is a subway downdown then pops up to be an El. as you go north. It was quite beautiful to see the snowcover. We got up to Loyola (Lake Shore Campus) around 7:45, giving me 45 minutes to relax before the test. It was in the same building as the last time I took the test, so I had no problem finding my way. (Damen Hall is the big building on the left. The view on the right is looking out of the window from my seat in room 530 -- i.e. 5th floor.)

In our room we had Physics, Chem and Biochem. There were I think 5 other classrooms being used for other subjects. More than half of the people in our group was there for physics. (One guy was a jock type, who even forgot to fill out his information before he turned in the test. I'm just saying...) I think I did pretty well on the test. Much better than the last time at least. My time management was much better this time, so I answered probably double the questions I answered last time. 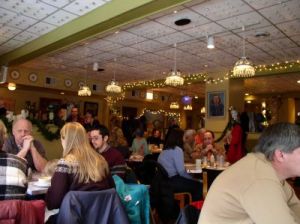 Since my CTA card had expired (I lost about $20), I had to use a day pass that morning, so after the test I decided to ride the rails a bit. I went up to Evanston and had lunch (ok, so I ordered breakfast) at The Lucky Platter Restaurant. I used to go there often for breakfast after I had been wandering the streets or at a blues club all night. The thing that originally brought me in was they make homemade cream soda there. Yummy. I order a different thing each time I'm there. This time I got the 'Scramble' with cheddar, apples, and andouille sausage. Yummy. (The potatoes in their 'scrambles' are roasted potatoes instead of the fried / hashbrowns you usually find in breakfast places.) Got the Apricot Cheese Flakey with it. It's a REALLY good place to eat, but I have a hard time recommending it to people because while the food is excellent, people often complain about the servers. I'm low maintenance... I judge a restaurant on its food, not its service usually, but I have too many friends who are picky about service, so I rarely recommend it. (And for the friends who aren't hung up on service, the menu is too much for them. The term "funkalicious post-Hippy eclectic world cuisine" is as far as they can get.) (BTW: those dots on the ceiling in the internal picture are aluminum foil balls stuck to the ceiling... if that tells you anything about the kitschy art in there.) Anyways, I've never had a bad meal there, this time was no exception. Across he street is Belgian Chocolatier Piron, so I decided to get dessert there. Those who know me know I'm not big on chocolate. This didn't change my mind :D (Although their English Toffee was superb.. but at $20/lb I couldn't get much of it.) 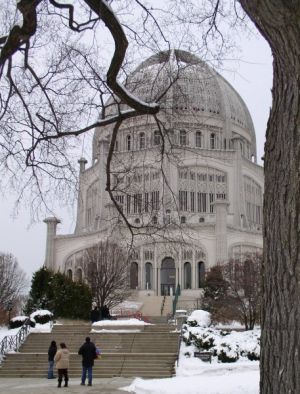 After eating lunch, I went up to the Bahá'í House of Worship (webcam) to unwind from the test. (I often go up there to unwind, but this is the first time I've been there in winter.) Of course physics was top on my mind, so as I admired the architecture, an old question came back. The Bahá'í symmetry is 9-sided, but an odd-sided dome is inherantly more unstable than an even one. (If one half-arch is damaged, two opposing half-arches have lost half of their support rather than just one.) But as I looked at the dome I realized the trick. The dome is actually made up of 36 segments! (9*4) So how do 9*3=27 internal columns support 36 segments? Every third column is larger, and actually spans two segments. (Effectively giving 36 columns.) Anyways.. I spent quite a bit of time in there. The thing I really like about the building is the lengths they went to for illusion. The building is a sturdily built steel framed dome, but the decoration makes it look like lacework that would never stand up. The columns are designed to look like the building floats an inch above them. The alcoves are really stable Romanesque arches, but they're made to look like unstable Arabesque arches. (Anyone who knows me knows I like watching magic shows to try to figure out the illusions.) When I went downstairs to the museum, one of the greeters had seen me upstairs and talked to me a bit. We discussed string theory and some other stuff a bit and she gave me a (photocopied) book on the architecture. It got as close as anyone has ever come to proselytizing while I was there -- she gave me the address for the construction of a new House on a brochure about becoming Bahá'í. (I like that they're generally low key on that.) The new house of worship in Chile looks like it will be stunningly beautiful. (And in the Andes, couldn't ask for a better backdrop ;) ) It looks like it will top the Indian one.

So I talked to a few of them for a while and left around 5:30. On my way back, I had to ask this question: WHY DO WOMEN WEAR (SPIKED) HIGH HEELS IN THE SNOW???? Haven't they ever heard of physics??? Higher pressure -> easier melting of ice (snow) -> lubrication -> slippage -> fun for everyone around them. (They're taking the principle of ice skates and localizing it to a single point.)

Anyways, so I get to Union station and call Universal Taxi for a pickup in an hour and a half at the Clarendon Hills station. Why did I call them? I have a toll-free number for them to call from the pay phones. I get to Clarendon Hills and they aren't there. It's night, snowing, windy, bitterly cold, no place to go inside... and they're not there. I call the dispatcher and they haven't even assigned a cab to get me yet, so it'll be at least an hour before they get me! I called American and they had a cab there in less than 10 minutes! Universal Taxi is now joining Sony/BMG on my boycott list. I've given them plenty of chances. They've made me miss trains twice when I called the night before. They've made me wait over an hour at the station when I called ahead of time at least 4 times. I'm usually pretty forgiving, but this is the final straw for them. 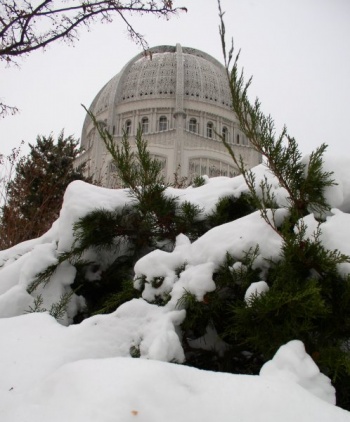