Let's see, I could rant about not being able to go to the Nevada Test Site for my project due to not getting clearance, but I won't. Today's entry isn't going to be a rant at all *gasp*. Because I wasn't able to go to NV this week, I was able to go to a concert I'd really wanted to go to this weekend. So today's RanTom Thoughts will be about that instead.

Well, after I moved I couldn't remember who the pianist was. (I'm terrible with remembering names.) but I heard another song of his on the radio and instantly recognized his style. I found out it was Van Cliburn, looked it up on the web and yep, that was the record I'd had as a kid. (Apparently a LOT of other people had it too, it was the first classical recording to go Platinum.) 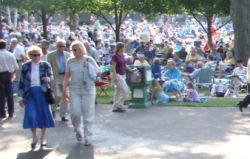 This weekend at Ravinia, Van Cliburn was going to be back, 30 years since his last appearance there. Alas, I was going to miss it due to this project in Nevada. However, when my clearance didn't come through, I was finally able to make it. I have to say, it more than made up for the disappointment of not being able to go to the Nevada Test Site. Ravinia has 3 levels of seating. Two for $50/$75 in the covered amphitheater and $10 for the lawn surrounding it. The lawn doesn't have a direct view onto the stage, so you get two types of people coming to Ravinia concerts. Those who wish to see and be seen (monkey suit types) who buy the $75 tickets, and those who go just to hear good live music buy lawn tickets.

People out on the lawn bring games, wine, food, candles, etc.. it's like a huge community picnic before the concert starts. Now some of my friends would despise lawn-goers, but personally, I like the experience of the lawn better. It's more 'earthy', which is more my style. This concert had a 4th level of people who paid $600 for the gala dinner afterwards. Way out of my price range, thankyouverymuch. 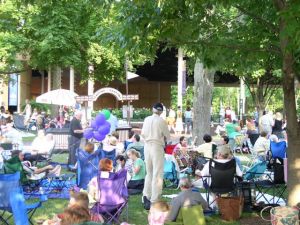 My view at the beginning of the concert

Part of the Ravinia experience for many lawn-goers is taking the Metra to the event. There's a Metra stop right at the gate of the park, with a special Metra train that leaves the station 15 minutes after the concert ends. It's fun being on the train-ride back, with everyone talking about the concert we were all just attending. I arrived 2 hours early so I could grab some lunch / dinner at the park. (The one downside of my evening, a $9 chicken garlic sandwich that was so dry I couldn't swallow it and the bread was hard as a rock.) I found a tree fairly close to the amphitheater and read a book. (Vitals by Greg Bear) 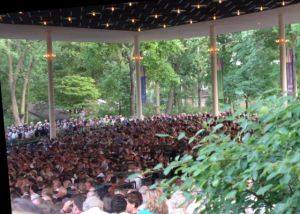 Eventually, the concert started and the first three parts are 'just' the CSO playing superbly (although pops-esque stuff). (Schubert's Overture to Rosamunde, Ponchielli's Dance of the Hours, and Rossini's William Tell Overture.) A few early cicadas and other insects were out contributing to the score. (Part of the appeal to outdoor classical concerts to me. I like the confluence of nature and music on a nice summer day.) 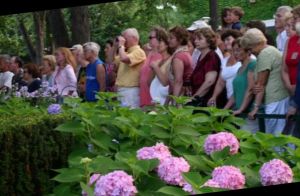 The Gathering around the ampitheater

At this point, a large portion of the lawn audience started getting up and drifting over to the amphitheater to stand around the outside and look down to the stage. Of course I joined them :D When Van Cliburn came on stage there was a huge round of applause, but it was nothing compared to what would come later.

I slowly drifted forward along the side and eventually had a better view than 3/4 of the people in the actual seats. (1/2 of them couldn't see his hands and I was about 1/2 way up on the side that could see them.) They played Grieg's Piano Concerto in A Minor, Op. 16, which has some excellent places to showcase his mastery of the ivory. I'd never seen a video of him playing before, but he played exactly as I'd imagined he would, with the energy and kinetic motion you'd expect from how his recordings sound. I was in heaven, finally seeing the hands that had given me countless hours of enjoyment as a kid. (With an impromptu performance by a car alarm in the middle of the performance.)

When it ended, the applause was deafening. I think we were all trying to thank him for all of our cumulative hours of musical enjoyment he'd given us over the last 40 years. He did I think 9 curtain calls and 3 encores, finishing up with Rachmaninoff: Concerto No. 2, to which the audience (even the black suits) burst out in a huge round of applause as soon as we heard the first bars. (I was so happy :D ) I had that stuck in my head the whole 3 hour trip back home :) The concert was everything I expected and more. To think that I could have been in the middle of the desert instead. 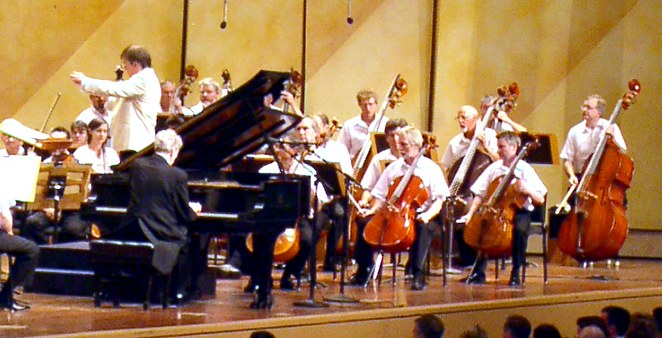