From Wikitheus
(Redirected from LV)
Jump to navigation Jump to search 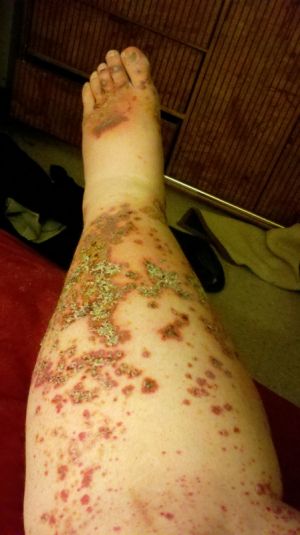 Left leg 2013-03-17, the day before my birthday. I didn't photograph my other leg at the time because I was just trying to show mom the LV itself, not the secondary infection that had set in on the right leg. Also, I was in intense pain, so I wasn't exactly thinking about chronicling.

For the TL;DR crowd: In February I developed a condition called leukocytoclastic vasculitis, which is essentially a disease where the immune system decides your blood vessels are foreign invaders and attempts to destroy them. It appears to be chronic, however, there doesn't appear to be internal organ involvement, and it looks like we're finally getting it under control with oral steroids.

When your dermatologist hands you a copy of the page from her reference book and you see the first line describing your condition includes "small-vessel necrotizing vasculitis", the teenage boy in you reading his mom's medical encyclopedia starts shouting "Cool! I have something with necrotizing in the description!", but then the middle-aged man in you kicks in and says "YOU FOOL! DON'T YOU UNDERSTAND THAT MEANS DEATH! YOUR OWN IMMUNE SYSTEM IS OUT TO KILL YOU!" However, the teenager mumbles under his breath as he grabs the keys for the new car and dodges out the door, "I still think it's cool."

This is a post I've been promising to write for a long time now, but I've been reluctant to put it out to the public and have only told a handful of close friends. I've procrastinated on it until I knew what it was, then until we saw if it involved the kidneys, then until I got confirmation from the biopsy, then seeing how the treatment was working. However, it's time to stop procrastinating. I have e-mails from friends casually asking how I am that I haven't replied to in months. Our annual family get-together is in a few weeks and my father's birthday is today, so people are going to be wondering why I'm not going. So, here goes... (I've decided to post this here instead of my LiveJournal account because I want to keep the images under my own control.)

About a week after my friend Jana came to visit me in February, I started getting small red spots around my knee. They itched and so at first I thought they might be bedbug bites, since I had spent nearly two months in hotels at field tests at SRNL, in CO for the holidays, and after totaling my car in Iowa. A week later, the spots had spread across to the other leg and became more of an itchy rash on my thigh. In the beginning of March, I had spots on my left hand and swelling and joint stiffness in my hands. At this point, the spots on my legs started turning purple and started coalescing. A week later, a secondary infection had set in on my right leg and the spots were turning black. At this point, when I showed our secretary, she told me "Go to an emergency room NOW!" This finally made me take it seriously and I went to see my doctor, who then referred me to a dermatologist. The dermatologist instantly recognized it and told me it was leukocytoclastic vasculitis, giving me the above page from her reference manual. We started a course of oral antibiotics to fight the secondary infection and started topical steroids and antibiotics to try to bring it under control.

At this point, I took two weeks of sick leave then switched over to half-time sick leave for the next month. (Yay for benefits! My boss has also been VERY understanding throughout this process. By freaky coincidence, our secretary's son also developed vasculitis about the same time I did.) During this time, the swelling would cause incredible pain if I was up for more than three hours. Consequently, I was on bed-rest much of this time, which led to the spread of the rash up onto my back, arms, and lower abdomen. (Not to mention getting a common run-of-the-mill pressure sore from being on my back most of this time since I could not stand to let anything touch the front of my legs.)

I have had 4 outbreaks since February, occurring almost exactly one month apart. However, they take about 2 months to go from outbreak to healed, so I have been having two sets of lesions going at any one time. The third convinced the dermatologist to send me on to a rheumatologist since it appears to be chronic. After receiving the results of the biopsy, he agreed with the LV diagnosis and started me on a course of oral steroids a couple of weeks ago. As of this writing, I have had no new outbreaks in the last two weeks and the old ones are finally starting to heal. The malaise and depression are finally breaking and I'm able to start getting things done again (as can be seen by this very post.)

I've been tracking my progress with the number of band-aids and bandages I have to use if I wear shoes. Today was 3 gauze pads and no band-aids. (Down from 5 and 6 two weeks ago.)

Oh, and after things heal, my legs are left with discolored blotches, so I've gotten the nickname Giraffe Legs. Great.

On 2013-05-10 I went in to a surgeon to get a two-punch biopsy on a fresh lesion. The biopsy results indicated the following:

What does this mean? Well, it means we have a definite diagnosis on LV, but we do not know the initial trigger. In approximately 50% of the cases, they never find out a trigger, so I don't have my hopes up. Through blood and urine tests, we have largely ruled out systemic (internal organ) involvement, so that is a Good ThingTM. Once we confirmed the diagnosis, we started an aggressive course of oral steroids, which appears to be working. YAY!

Many references I see to LV (including Wikipedia) refer to it as 'cutaneous small-vessel vasculitis', but my pathology report indicates medium-vessel involvement, which had me worried for a little while, but the rheumatologist said that's within acceptable variance. LV is actually a broad category of conditions, not just a single disease.

Many different possible causes are known. These range from hypersensitivity vasculitis (allergic reactions to flu shots and other drugs), cancer (leukemia), infections, kidney disease, all the way down to one case of being associated with fast food. Again, in a large part of the cases, no primary trigger is ever found, which appears to be the situation in my case.

The occurrence of leukocytoclastic vasculitis in adults is rare. Studies in the UK, Spain, etc. have shown rates ranging from 10-40 adults per million per year. Anecdotally my dermatologist sees about ten cases per year (including children) and my rheumatologist has seen about 10 cases in his entire career. While on the surface these seem contradictory, they're not. The dermatologist's numbers include children where it is known as Henoch-Schönlein purpura. Dermatologists are usually the first line of defense and the condition is often only referred to a rheumatologist when it becomes apparent that it is likely chronic. My understanding is that, in children, the condition usually goes away quickly and is rarely chronic.

Things are doing much better this week. Today I'm down to 3 gauze pads and no band-aids. The malaise seems to have finally worn off and I'm getting a lot accomplished. I'm finally getting sleep again. I'm actually feeling like being social once more.

I'll update this page in the future as progress warrants. The permanent link is: http://tometheus.com/lv

So, that's how I've been the past few months. How are you?

PS: I've disabled comments from un-registered people on the wiki and disabled registrations because I have come to despise comment threads. If you wish to leave a message, you can use my contact form.

PPS: OK, so I really disabled new registrations because within 4 hours after opening it up to new accounts I had already gotten a spam registration. Ugh.

PPPS: One bright spot in all of this is that I love my new car! I get about 60mpg on the trips to the doctor's offices.